The case that started everything. 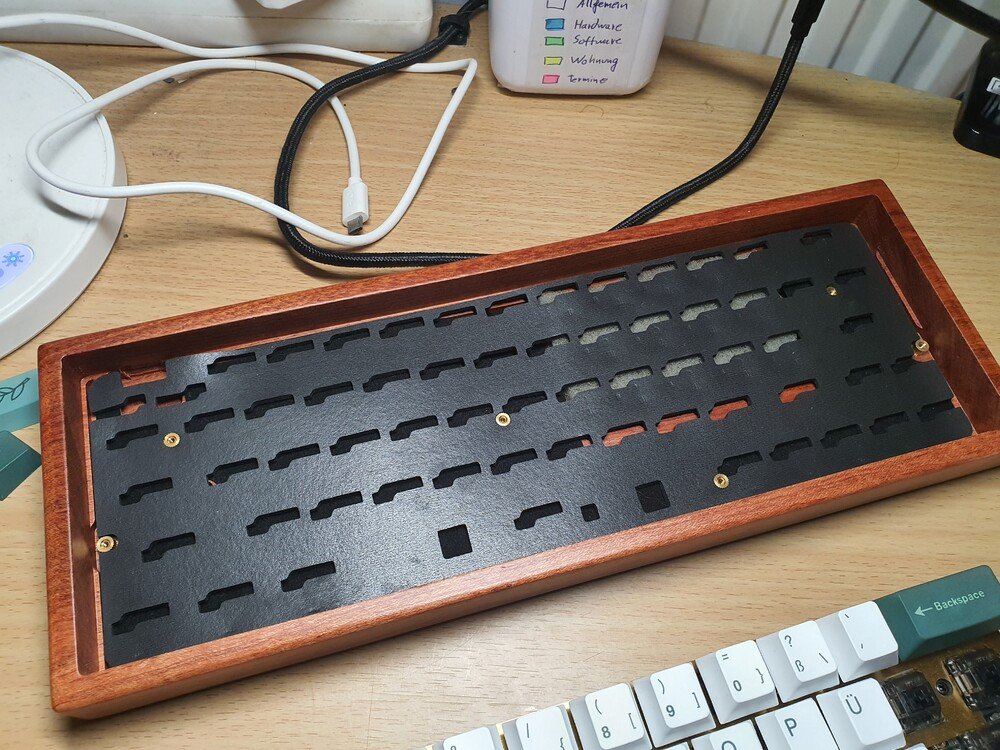 Some PCB-Foam for further dampening. Testing the DZ60v2 RGB to see if every socket works. Smart of me to do that AFTER I installed the Switch Pads, right? 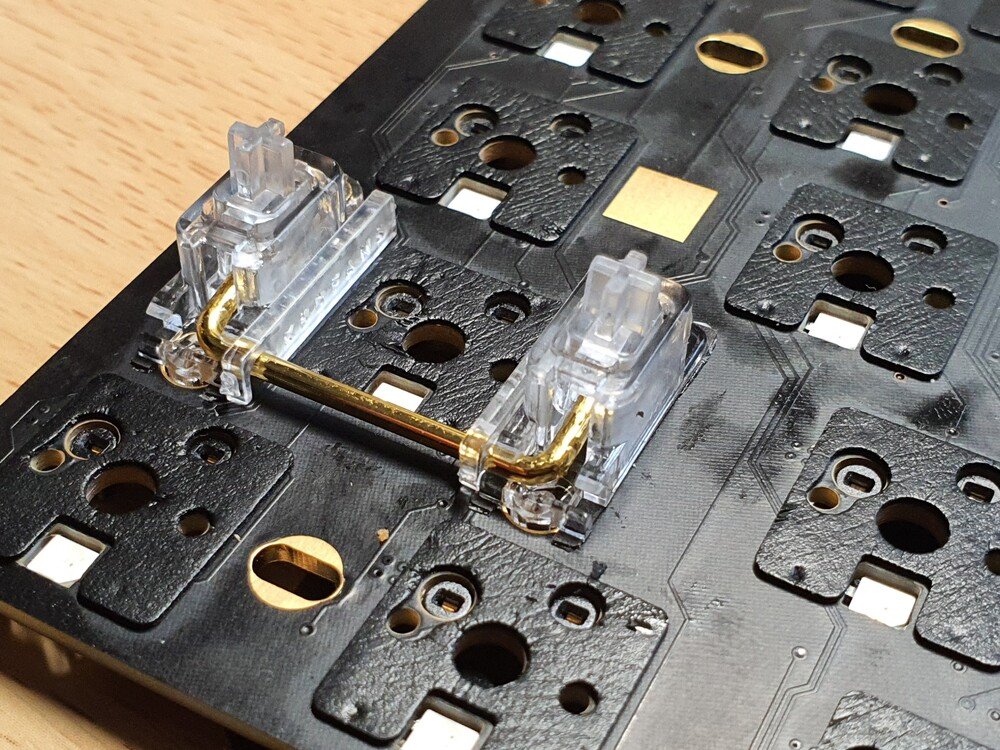 A detail of the installed Stabs and the KBDfans Switch pads. The installation was a bit tricky but I like the result. 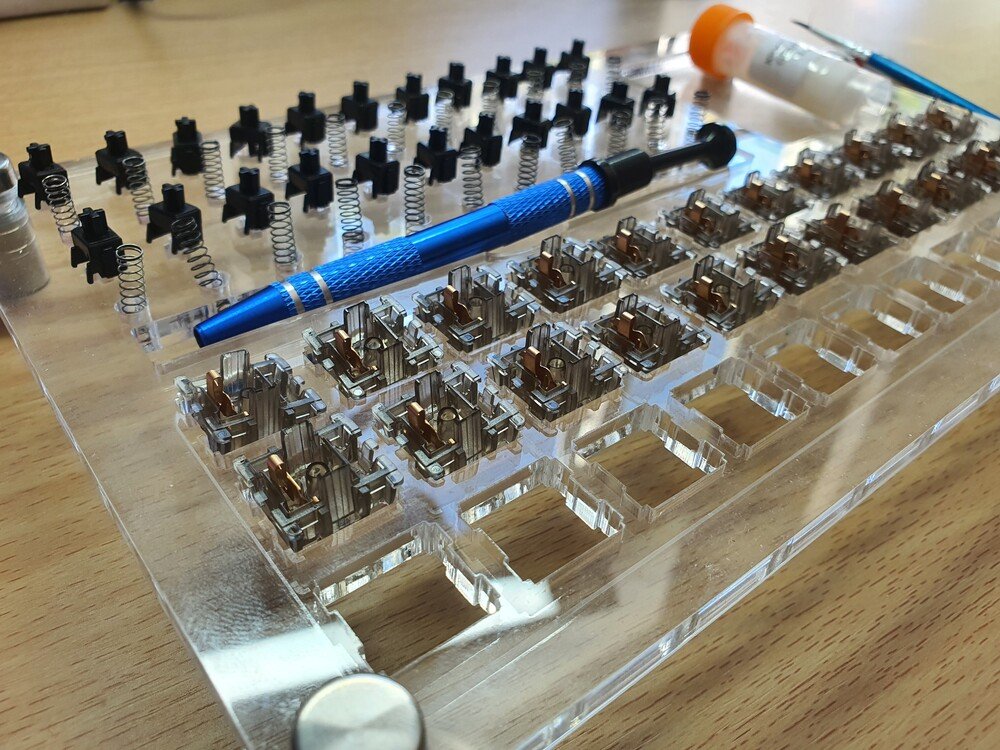 Prerparing the Stabs: Every stem is being holee-modded with the Stab-Foarm from KBD-Fans as well as being lubed with Krytox 205g0 The foam-holee-mod. I did not pass around into the upper hole as the foam sometimes sticks too far out, resulting in the stab getting stuck alltogether. (I think that's called the Epsi-Mod then?) 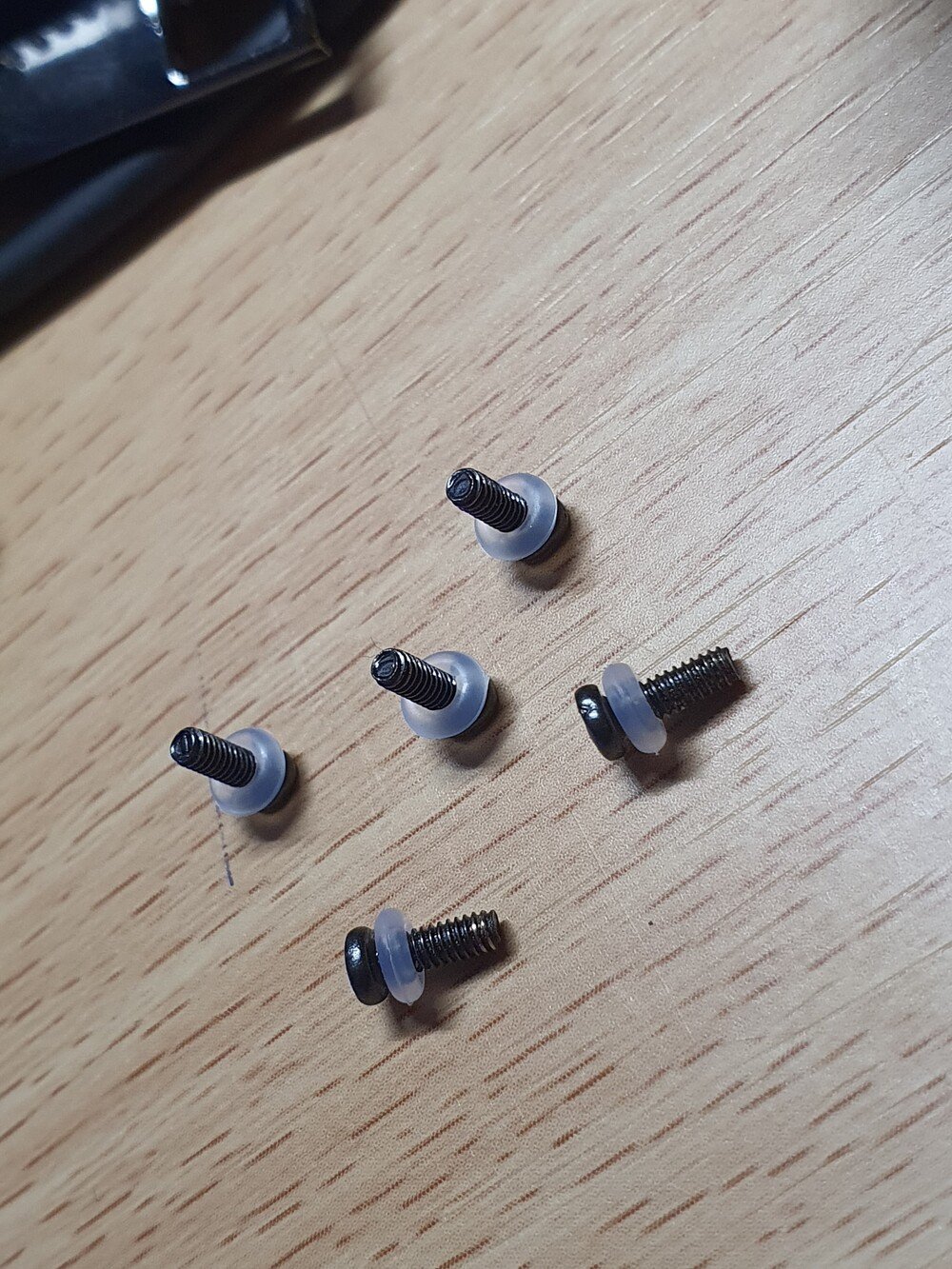 To emulate a gasket-mount, I used somewhat longer screws and added silicone O-RIngs, between which the PCB is going to be sandwiched. 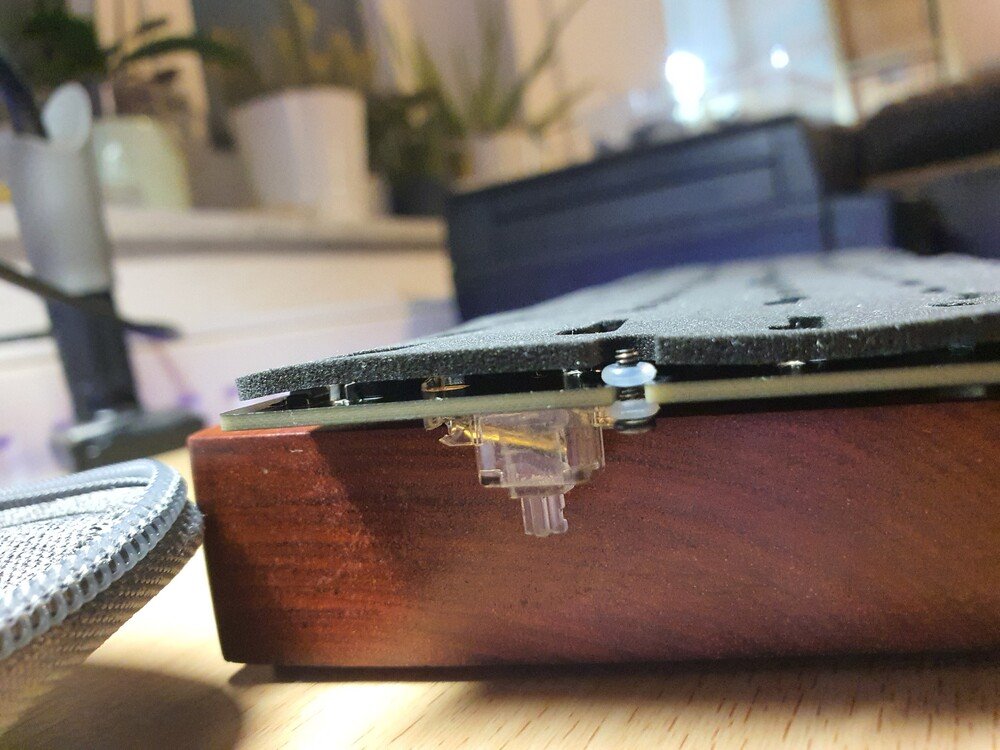 A detail of the aforementioned pseudo-gasket-mount, sandwiching the PCB between to O-Rings. Another advantage of this method is the fact, that the screws won't simply fall out of the PCB if flipped on its head, as demonstrated here. 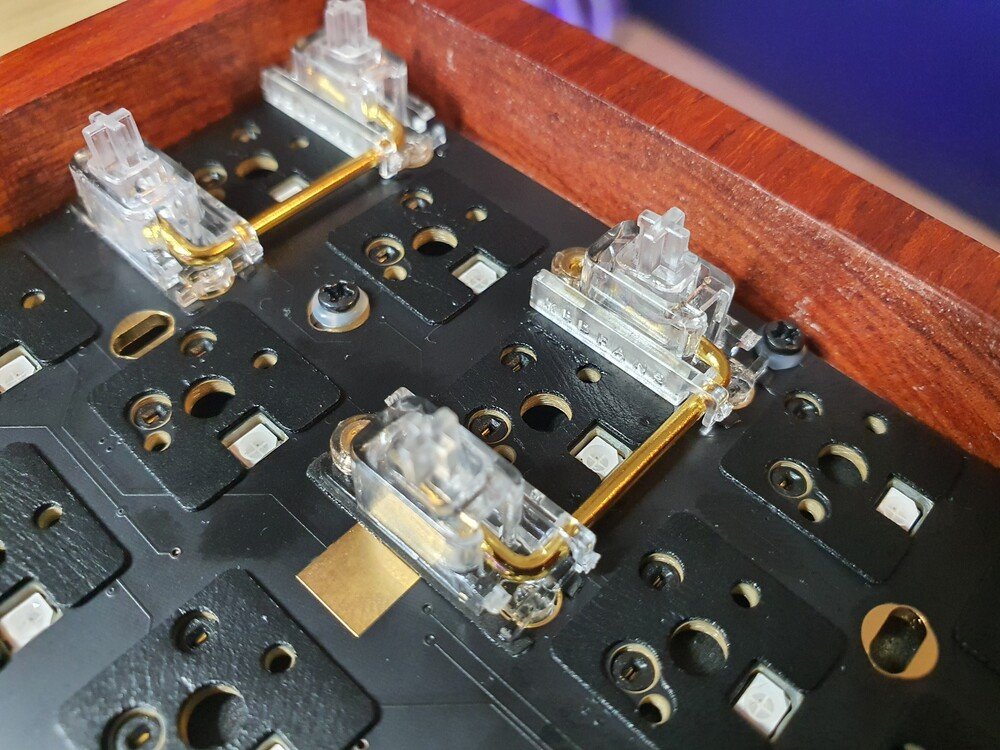 Another detail of the O-Ring-Gasket: The screw doesn't attach directly to the PCB, allowing it some room to flex. 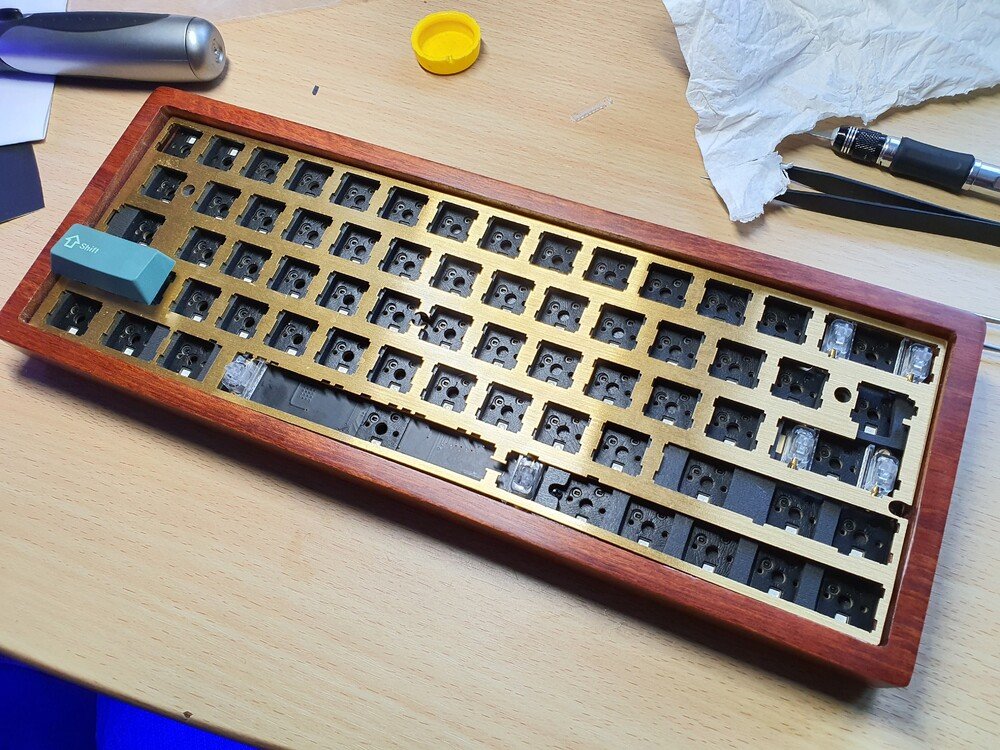 After intsalling the PCB, pcb/Plate-Foam and the plate itself into the case. I really love the look of the brass-plate in the wooden case! Testing the PCB again after it has been installed in the case. Some fine-tuning of the top-left screw was needed, so that the cable easily goes into the port. Fun fact: (accidentally) holding Esc while inserting the power-cable resets the board and clears all keybindings. Hooray! After that, I removed that switch for further testing. 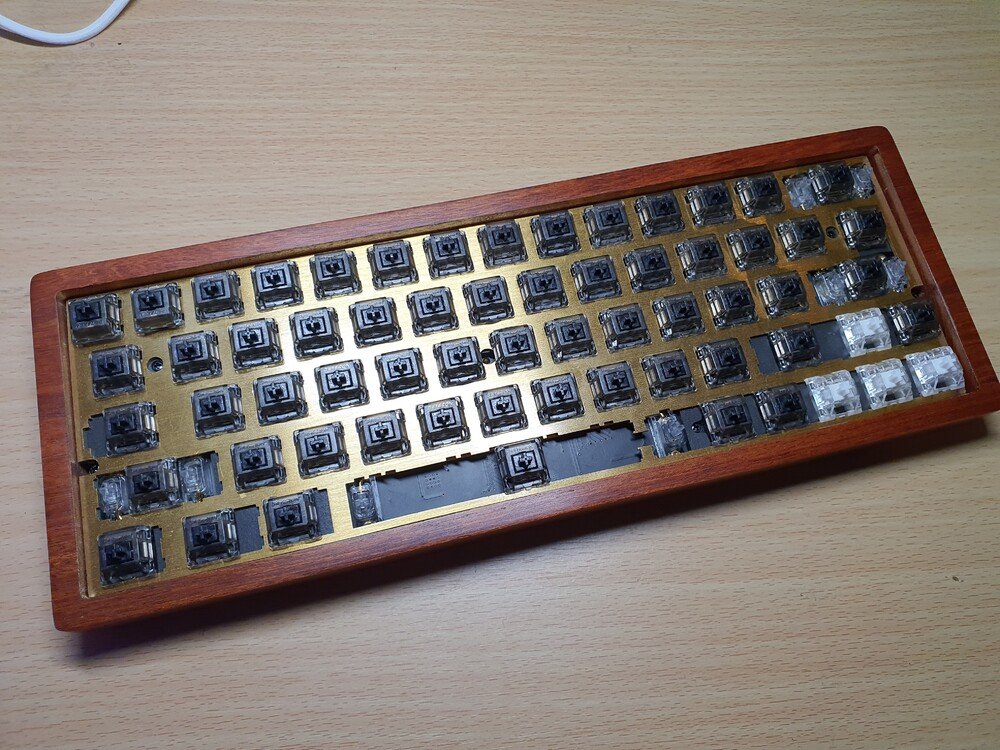 Putting in the Switches: hand-lubed & filmed Gateron Black Ink v2 on the Alphas and hand-lubed Gazzew Boba U4 on the arrow-keys 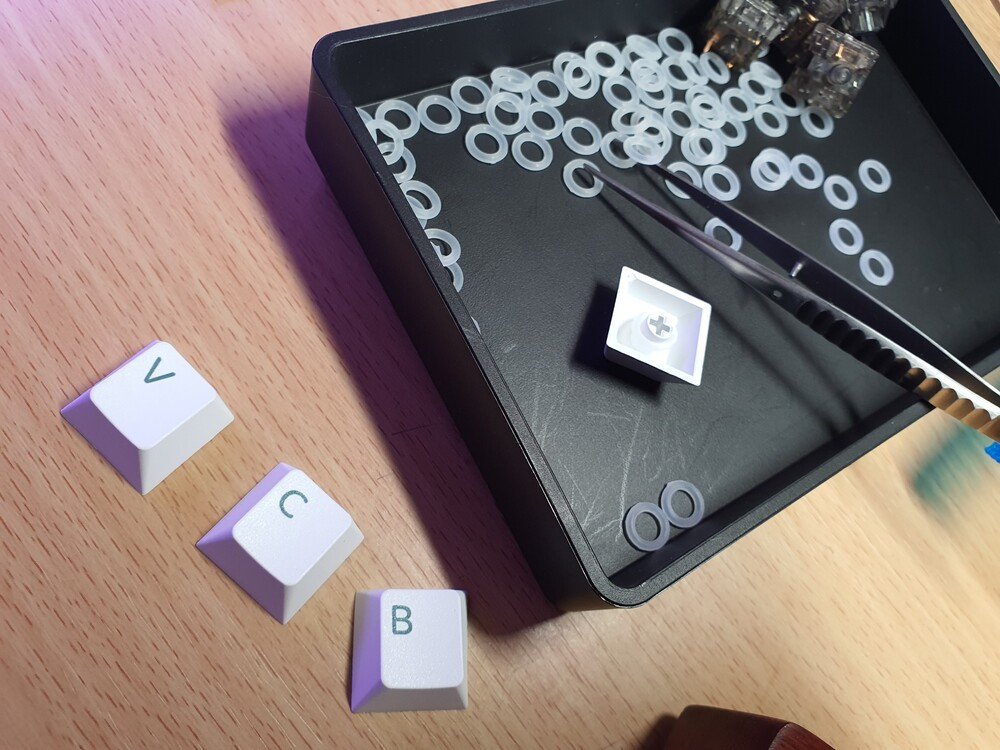 Controversial opinion, but I think O-Rings and Inks go quite well together in terms of feeling and sound. And if she doesn't like them, they can easily be taken off again, so no harm done. 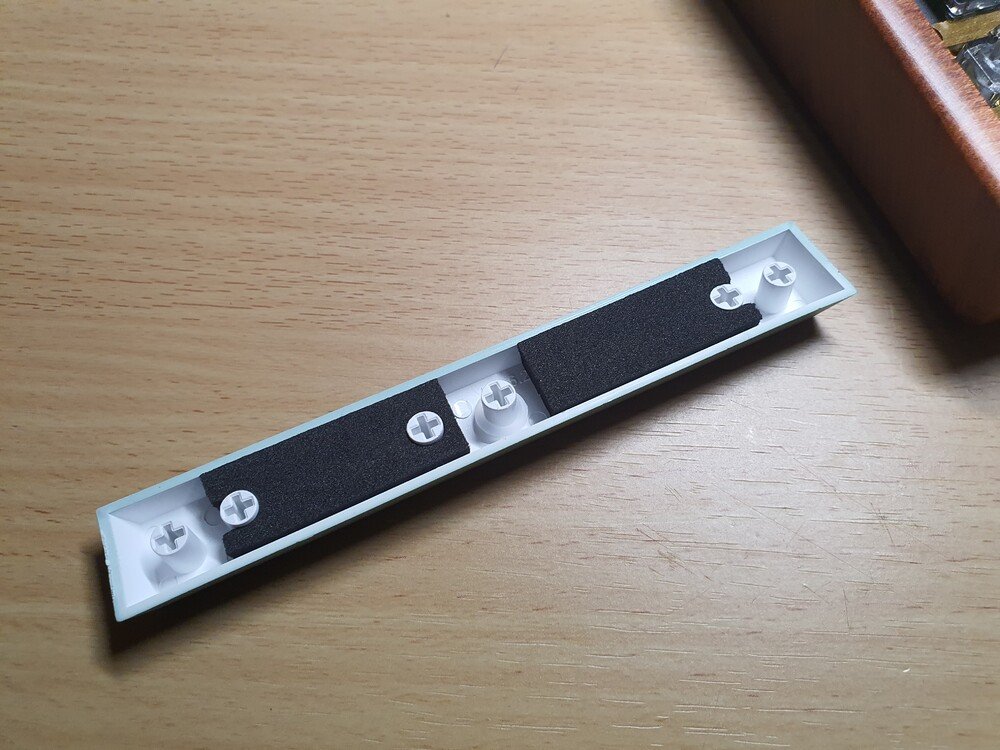 Some extra foam for the spacebar, too! Installing the keycaps. As one can see, I have put my heart into this build! A final test to see if everything still works as intended, check the configuration one last time and see if I have to replace any switches. 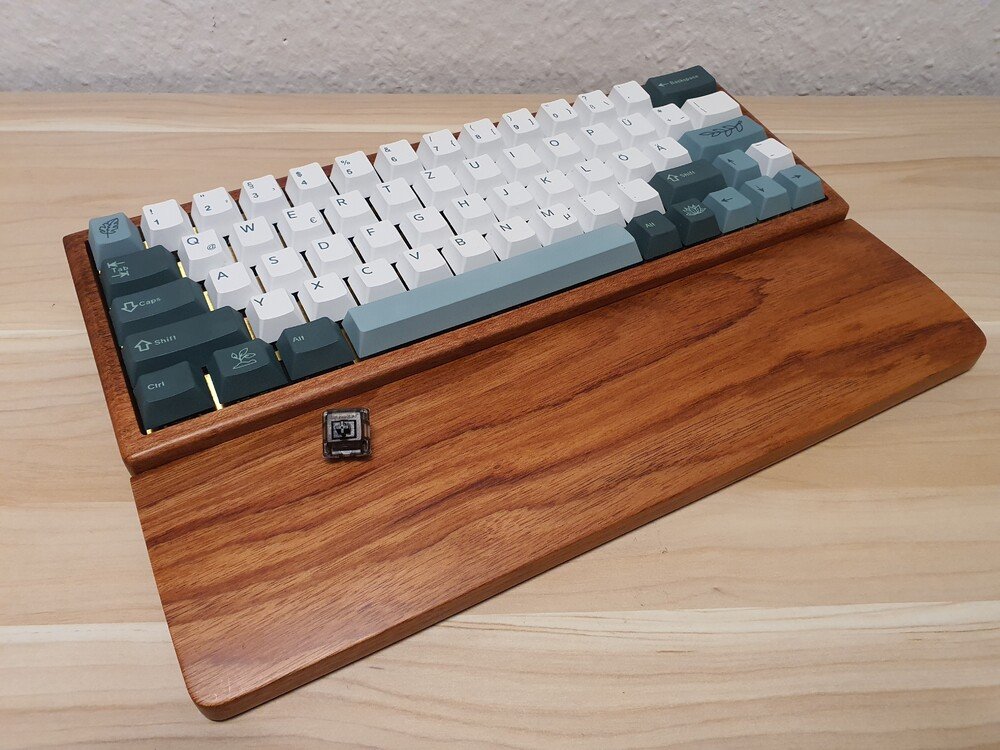 The finished product. I hope, she likes it! 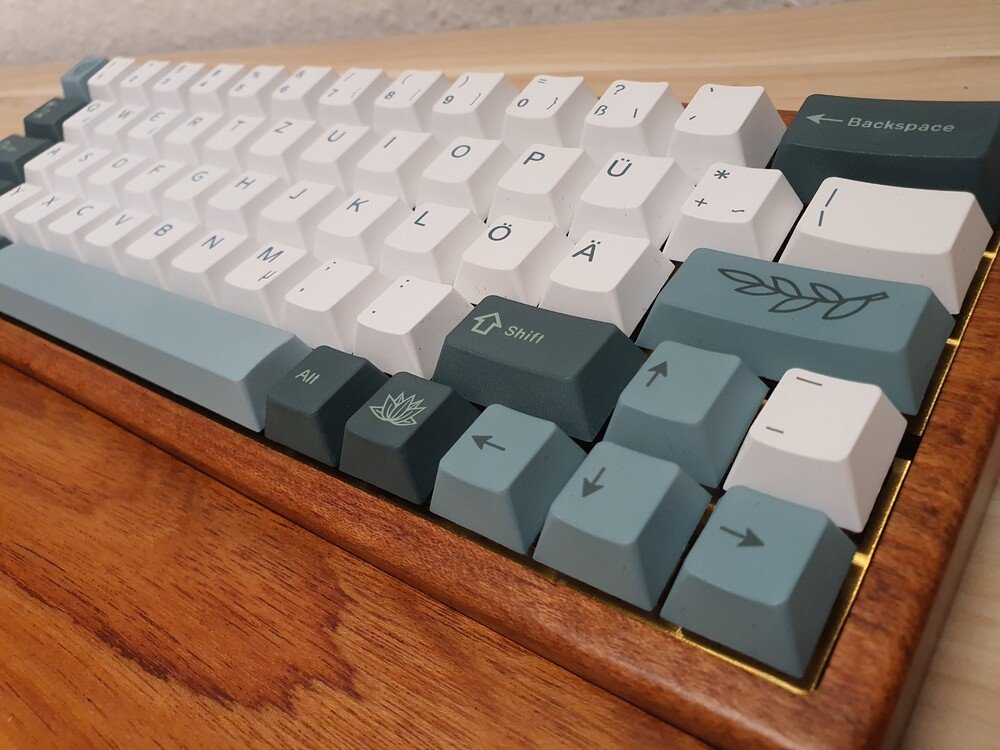 Some detail of the final build. 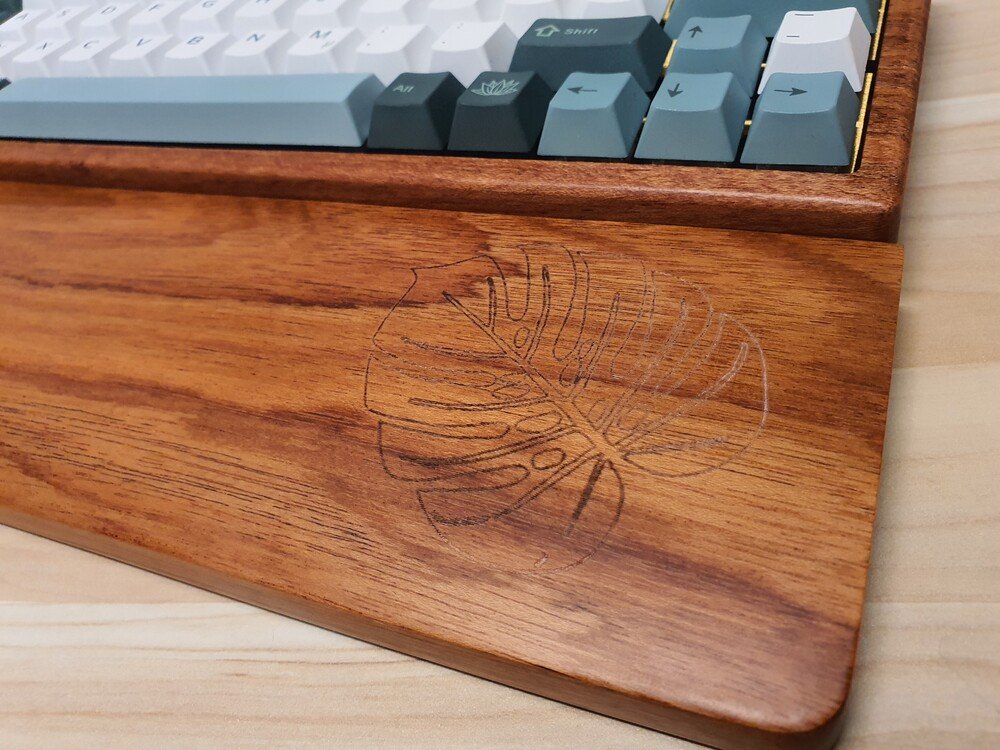 Full view of the final board

This keeb is supposed to be a birthday present for a very very close friend who is incredibly dear to me.

When I got into building and modding keyboards in early 2021, I excitedly told all my friends, who, to my dismay, didn't share my enthusiasm for the rabbit-hole that is custom keyboards. So, when she visited me mid-2021 and I told her about this new hobby of mine, I already expected her reaction to be as indifferent as the rest of my surroundings, and indeed it was. As so often before, I was met with that dreaded "It's just keyboards, what could be so special about them?" line. But that attitude changed in an instant when I handed her one of my switch-testers to show her how different switches can feel and sound compared to another. That did indeed spark her curiosity, and while she tried to figure out which switch she liked most on that particular tester, I brought my Drop Alt from my desk. This was the breakthorugh: When she tried typing on that board, she was truly and honestly amazed by the difference in sound and feel compared to her off-the-shelf rubebrdome keyboard she uses at work. That moment of "whoa" was when I knew that one day, I HAD to build one for her.

-And as it turns out, that moment came sooner than I thought.
I had already seen the GMK Botanical clone by YMDK on Aliexpress and, knowing her hobby of raising plants like Monstera and Philodendron, I tought that this would be the perfect keycap set for her. But when someone offered a cherrywood 60% case complete with a fitting wrist-rest on german mkd discord, I knew thatv the time had come to suprise her with a board on her own. So I ordered the keycaps and case, took the PCB I still had in stock for a different build and got out the Gateron Back Ink v2 which she had loved so much in my Drop Alt.
Color(s): Green White
RGB Lighting? Yes
Keyboard Type: Custom

As the friend I built this keyboard for has found her passion in raising and collecting Monstera plants, I thought: Why just stick to the keycap set? So, as chance had it, I found a shop that does custom laser engravings and had a Monstera Leaf engraved in the back of the case as well as onto the wrist rest.
And, to make that build truly hers, I also had her initials as well as the date when we met engraved, too!

This part of our website requires a login.
Please login with your credentials to proceed. If you do not have an account yet, don't worry. It's easy, painless, and completely free to signup!
or simply